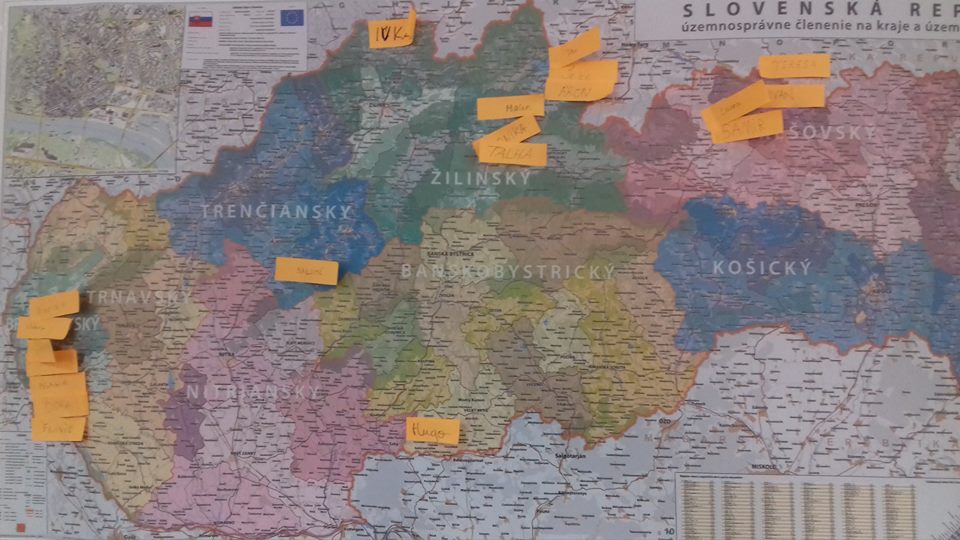 Do you already know that the volunteers in E@I are a part of the European Voluntary Service (whose name has been changed to European Solidarity Corps not long ago) financed thanks to the European Union? Each new volunteer of this program is invited to meet other people also volunteering in his host country, other young people between 18 and 30 years old, who are coming from various countries, are volunteering in various towns at different organisations, and who have various missions related to different fields. Such a variety! A meeting like this could only be interesting, I thought – and my ex-volunteer colleague confirmed that “it’s like an Esperanto-meeting, but in English”. Really?

The volunteers’ meeting took place in the Slovak Tatras during freezing December days. Eighteen volunteers from Slovakia came from the entire country on Wednesday evening and left the place on Sunday morning. The meeting has been guided by two women who proposed our schedule. The programme was in fact well thought out and quite interesting. On the first day we played some little games to get know each other and received some advice about the volunteering. During the next days, each volunteer presented his association and goals. It was also possible to speak about our experience, ask questions to the supervisors, exchange on difficulties. We even get a hiking day to discover the village of Zázrivá, where the meeting was situated, and its mountainous outdoor. Unfortunately the weather was too cold and the path too slippery, so we had to turn back despite the landscape being magnificent. In the early evenings we could watch the Slovak film Cigán, which I liked, and take part in some instructive quizzes about Slovakia. After that the atmosphere was more festive and participants went to chat in the pub next to the inn.

To be honest, I was a bit dubious about communication, because I never ever needed to truly speak English outside lessons, and though my understanding level was good, I was aware that my speaking level was cryogenically frozen. The words were easier coming to me in Esperanto, and once I even spoke to people in Esperanto by mistake. I was sorry that I couldn’t speak as easily as in a real Esperanto-meeting. In concrete terms, I realized that people gladly created little groups at free time and talked in their mother language: whether that was French, German, Greek… But my biggest surprise was that even mutual understanding was difficult, whether for each one’s accent, or for the diversity of fluency level on the whole. I have no worry about the heterogeneity of language levels: it’s nice that everybody can be a volunteer by the EVS, because it was also made to allow people to improve their skills. Concerning the variety of accents, I have merely become more aware that a lot of non-native speakers of English would always stay on the sidelines. Even with good language skills, how could we communicate on an equal footing if one’s pronunciation is so unusual that the others can’t easily understand it?